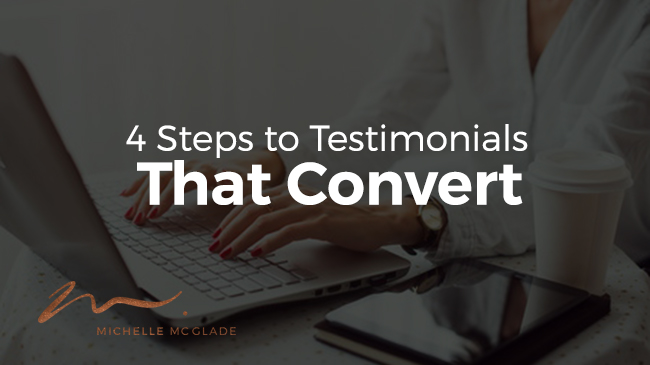 4 Steps to Testimonials That Convert

Today I want to lay out getting the 4 Steps to Testimonials That Convert. You need testimonials for your business and you want them to convert to more clients, right? While written testimonials are always great, ideally video testimonials are king! So let’s go through the framework that I use in my own business for this.

First, I want to give a shout-out to Jessica, a member of my free Facebook community, Getting Clients in Your Wellness Business! Because let’s face it. Getting Clients = Making Money! Jessica asked this exact question on testimonials and I thought this would be a perfect topic for this week’s blog.

Jessica’s question, specifically, was “Has anyone ever considered using Google forms to collect testimonials? I’m thinking about writing one out so I can just send the link to people who are interested in giving me one. Is there any reason why that would be a bad idea?”

There are a lot of ways to go about this. I’ll admit that when I was first starting out, I knew that collecting testimonials was an important step. But it was so intimidating! I’m sure you think the same thing.

Let’s face it. You don’t want to impose on people. You are afraid they are going to think “that’s ridiculous” or they simply aren’t going to want to help you. But nothing could be further from the truth!

You need this for your business, so you’re going to have to get over it! Plus, when you’re providing amazing outcomes for people, they are going to want to help you! I promise! Who doesn’t want to have that feeling of being helpful to someone. It feels good!

So, I want to encourage your to push yourself to get over this fear and just go in for the “ask”. But first…

Getting somebody to write something up is good. It’s better than nothing! But what is really great is to actually talk to them so you can also get their feedback. It’s huge for your business to have valuable feedback like this and to really dig in and get their story. You want to document that transformation and share this with other clients!

Truthfully, I did use a form in my prior clinic for awhile. People would fill it out and while it didn’t have the exact four steps on it, it was similar. It has four steps that helped a client to document their journey. Kind of like a before and after, which is really important in this type of testimonial!

I used this form for awhile and it worked. But when I specifically changed how I approached the testimonials and really started talking to people, that’s when the real juicy goodness started to flow, too!

In this example, I’m going to help you gain that testimonial from someone you’ve been working with for a short time. One to three months, for example.

In my old business, let’s say I would see a client for over 10 sessions over five weeks. That was a transformative journey.

So what is the successful framework? Don’t overthink this! Take action!

Once you’re done working with a client and taking them from Point A to Point B, ask them for some extra time! Schedule a quick call or some time with them to get their feedback. I genuinely want this feedback, regardless of the testimonial, because I want to get better! I want to know what worked for them and where they got hung up!

Listen to it in their own words, but I don’t want to use the time that they have been paying me for. I want to use MY time for this critical step. That’s really important. It is much more professional if you ask someone to do this outside of treatment time!

Than I go through these four steps, which I send to them ahead of time. I want to make sure they are prepared!

4 Steps to Testimonials That Convert

1. Where were you before we started working together?

Now, just be quiet and let them talk!

2. Where would you say you are now, post working together?

What was the highlight for you about the program or coaching? Details about the treatment and working together that were great were what?

Most of the time people are going to focus on the good things that happened during our time together. But, I do want to uncover things that I can actually improve, as well.

Sometimes, I’ll throw in this fifth question in order to dig a little deeper and uncover some dirt.

Everything can be better. And while it may not be necessarily part of the overall testimonial, I want to make sure that I’m able to encourage ways to improve my own services and become better at what I’m doing.

Now, we’ve documented their journey! What can we do with it?

Based on the feedback that you’re getting, you’ll be able to hopefully use a majority of this information as a testimonial. But, if nothing else, it is valuable feedback for you in your business.

Even if their story isn’t miraculous or it’s not dramatic or dynamic enough for a testimonial, you’re going to get information that will make it a win-win for your business!

Many times, you’re going to find that the big transformation cases that you just collected, you’ll want to use as a case study with your audience! What a different way to highlight these types of testimonials for your business!

When I’m hearing the information that the client is telling me, I often say, “This has been amazing work that you’ve done and I’d really like to share this. Can I write this up for you just to make it easy? I’ll use your words, but would love to use this as a testimonial. I’ll send it to you to get your approval.”

The key to this is that it helps to make it easy for your client.

You also know what is important to highlight and what can be skipped over. Not that you won’t be telling the truth, but you know that people want numbers and if someone lost 15 pounds, clients won’t know to highlight that specific accomplishment.

Be authentic! Highlight things that you know people are going to be looking to hear!

This, dear mavens, is what you can do to get testimonials that really do convert! 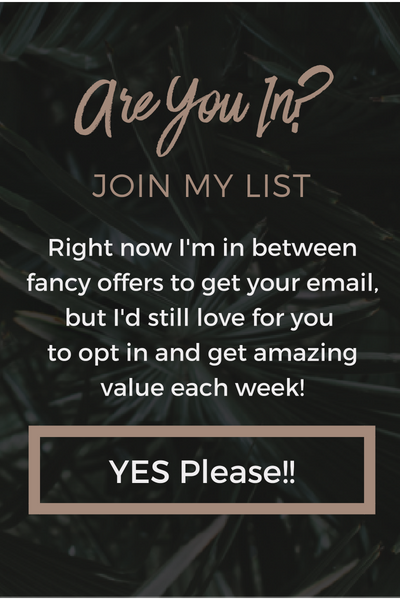 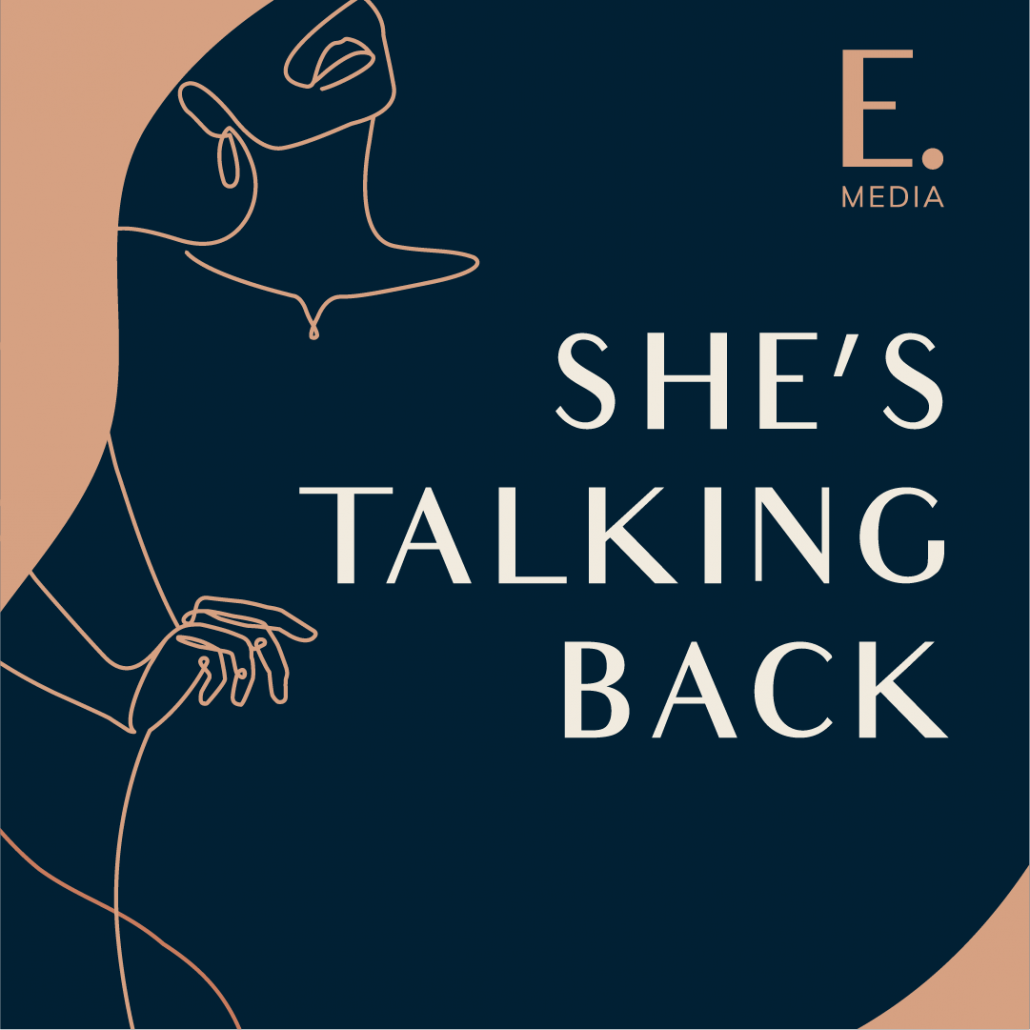 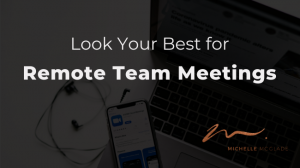 I’ve been working remote for 20 years but back then a remote team meeting meant speakerphone, coffee in hand while I spent the day in my bathrobe with an unmade face. No yoga pants required. True story. Five years ago I began my full time gig in the world of 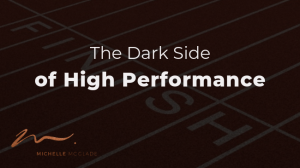 I’ve been thinking a lot lately about what it means to be a high performer. I’m in that category and it has been an extremely beneficial character trait, but also a character flaw. I’ll take the good with the bad and downright ugly, after all, it’s what makes me, me.

I never wanted to be in a leadership role or saw myself developing a team, it’s always so funny to me how we run away from the work we actually need to be doing. :O) You’ll be happy to know it’s a full circle moment. Now here’s what I’ve learned.